× This item is no longer available for purchase. 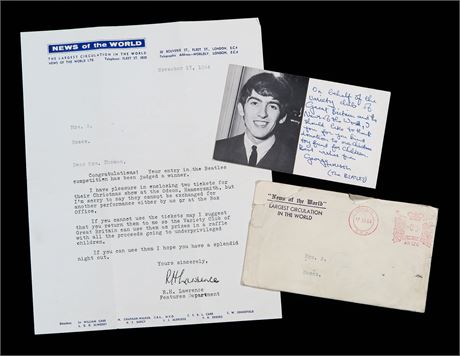 Payment Instructions
Please select your desired shipping method when checking out. If you are ordering multiple items, please contact us for combined shipping costs.
Details
Description

In autumn 1964 the infamous UK Sunday newspaper the 'News of the World', in conjunction with the 'Variety Club of Great Britain', ran a competition whereby readers could win a pair of tickets to The Beatles' Christmas Show at the Odeon, Hammersmith in London by donating to the 'Toy Fund for Children'.

This one-page letter dated 'November 17 1964' is addressed to one such winner who received a precious pair of tickets which, sadly but not surprisingly, are not included here.

However, what is included is a small one sided 'thank you' card of George Harrison with his printed handwritten inscription (measuring 13.5 x 8cms).

The original envelope postmarked the same date as the letter is included.

Very few, if any, of these letters or cards survived.